In 2012 my wife, Sarah, and I spent a year doing voluntary work in Kenema Government Hospital in Sierra Leone. I’d also worked in Sierra Leone in 2007. We had developed a great love of the country and its people. Despite being one of the poorest countries in the world (183rd out of 187 nations on the UN Human Development Index) the people in Sierra Leone are the warmest, most hopeful and most joyful people I can imagine.
Despite having been devastated by a brutal civil war which ended in 2002 Sierra Leone had made great progress over the last decade. It had transitioned into a safe and stable multi-party democracy. Although healthcare systems were still very poor there was real progress with infant mortality and maternal mortality rates falling, ever increasing rates of childhood vaccinating and improving life expectancy.
When the Ebola epidemic spread in to Sierra Leone from Guinea Kenema was one of the first districts to be affected. Because it was affected so early in the epidemic there was very little infrastructure in place to care for Ebola patients. Healthcare workers did not have adequate protective equipment and a great many were infected and died. Thankfully none of our close friends died, however hearing reports of how serious the situation was Sarah and I felt incredibly frustrated not to be able to help. 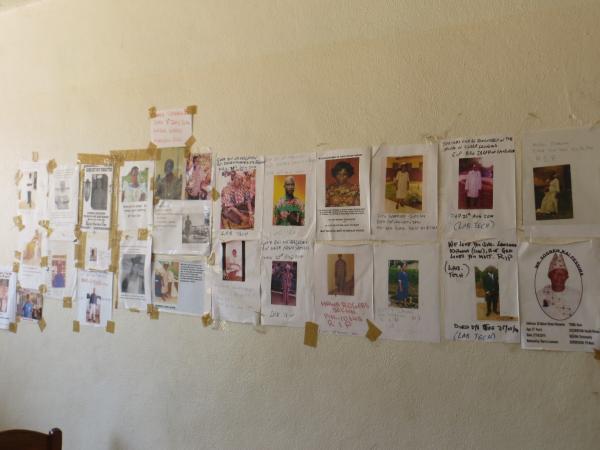 Eventually we found out about an organisation UK-MED. They were working closely with NHS England and the Department for International Development to try to make it possible for NHS staff who wanted to work on the Ebola response to take time out of their NHS work. The British government were building a number of purpose built Ebola Treatment Centres and the plan was to use NHS staff as part of the clinical workforce. We applied and after a screening interview we were selected and asked if we could make ourselves available to depart within 10days! Initially we weren’t sure that we would be able to take time away from out training programs at such short notice. However the support we received from PGME, our GP training program and our clinical placements was absolutely fantastic. An application which is supposed to be submitted at least 6 months in advance was approved within hours.

Before we could be deployed to Sierra Leone we had to attend a 9-day intensive residential training course. This was hosted by the British military at an Army medical base just outside York. We were in a group of around 35 NHS staff (mostly doctors, nurses and paramedics) along with around 30 Norwegian healthcare workers. As well as bringing us up to date with the clinical management of Ebola patients this provided lots of time to practice using protective equipment similar to what we would use in Sierra Leone. They had even constructed a mock-up Healthcare Centre so that we could go through a 3 day simulation of running a Treatment Centre. By the end of the course we felt really well prepared and were raring to go.

We arrived in Sierra Leone towards the end of November. 16 Of us were all working together in the new treatment centre in a town called Port Loko – the only problem was that the rainy season had gone on little longer than usual so construction at the site had fallen behind and it wasn’t yet ready to open. The plan was that once it was ready to open then the site would be handed over the Irish charity GOAL who would run it on a day to day basis. As we couldn’t yet treat Ebola patient we spent the next couple of weeks doing whatever as necessary to speed along the process. Some of the time was spent on training with the local and other international staff to ensure that we would all together effectively, but we also worked on finalising treatment protocols, constructing hospital beds, putting up fencing and anything else that was needed to get the site ready to open… We knew that within the district there were hundreds of people with suspected Ebola. A few were at another treatment centre that had opened, but most were being held in Community Care Centres. In these community care centres the supply of protective equipment was variable, and the staffing levels were poor which meant that patients could not receive the level of care that they needed. 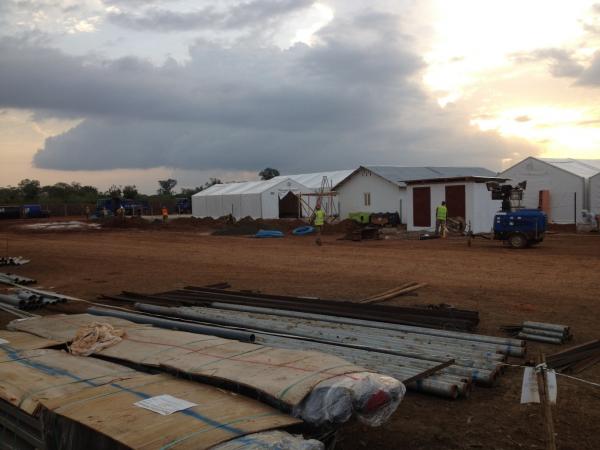 Port Loko Treatment Centre when we arrived - A building site

Once we were finally able to open we started to receive Ebola patients. Initially we only took a couple in order to make sure that our procedures and systems worked, but over the weeks we increased the numbers up towards 30. The centre was divided into 3 zones: The white zone was purely administrative; The green zone was a clinical area where we kept patient records, made decisions about care and where the pharmacy was; The red zone was the wards – this was the danger area where we always had to wearer protective equipment to ensure that we did not become infected ourselves. In the first instance we were sent the very sickest of the patients as they were the hardest to treat in the Community Care Centres. Emotionally this was very hard as many of them died shortly after being admitted to our treatment centres – and at times it did seem that the task was hopeless and we had to shift our expectations to recognise that even with our best efforts nearly half of the patients would die. Patients were of all ages and all socioeconomic background – Ebola is not a discriminating disease. Gradually in the second week though we started to see some patient improve and by Christmas Eve we had our first patient who had fully recovered and was able to be discharged home. Over the following few days more and more patients who had tested positive for Ebola improved and as their repeat test came back negative we could discharge them.
The biggest challenge by far was how to provide effective medical care whilst protecting ourselves from infection. It was essential that every single person in the treatment centre adhered strictly to the same procedures. Should one member of staff not do this then there was the risk that they could bring Ebola out of the Red Zone, putting everybody at the ETC at risk. The protective equipment that we wore was hot. We would wear normal hospital scrubs with Wellington boots whenever we were in the green zone. Before we could enter the red zone then on top of this we were completely covered head to ankle in non-breathable, waterproof protective clothing. We had 2 pairs of surgical gloves and a full head hood. Inside the hood we had a mask covering mouth and nose, and on the outside goggles protecting our eyes. Finally there was a heavy waterproof apron on top. In 35̊C heat it was only possible to spend a maximum of 35 minutes in the red zone. By this time there would be sweat pooled in the gloves and wellington boots, the scrubs underneath would be completely soaked through, the goggles steamed up and I’d be feeling quite dehydrated. Staying in any longer would have been dangerous as fainting in the red zone would carry a very high risk of being exposed to Ebola.
Even for those 45min it was hard to achieve much. Everything takes at least 3 times as long when the patient has Ebola. Siting an IV line is a 2 person job, made all the more challenging when vision is impaired by the fogged goggles, all the while aware that slightest drip of blood could be enough to infect yourself or a co-worker. Helping to change an incontinent patient is a slow laborious process. We had to be so careful not to become contaminated with faeces and take care not to move too suddenly or vigorously for fear of dislodging the mask or goggles. Talking to colleagues was difficult due to the protective equipment, but trying to communicate with patients who do not speak English was virtually impossible. At times we had young children separated from their parents and the only human contact that they had was with us in our full protective equipment – they were absolutely terrified.
Even after all that there was the challenge of removing the protective clothing carefully – this is the most high risk process and has to be done with painstaking care. It takes about 20min to get fully undressed: After being sprayed top to bottom with chlorine each item is individually removed with repeated hand washing between each step. Only the apron and goggles are reusable – the rest is added to the clinical waste and burned. The apron and goggles are soaked in strong chlorine to ensure that they are fully disinfected before being left to dry in the sun. 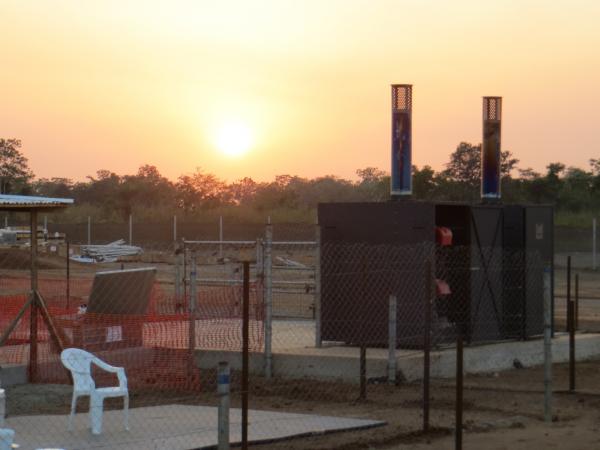 Sunset behind the incinerator

For all the challenges there were also wonderful experiences. As patients began to improve they were able to come outside of the wards and then we could talk to them as real humans (although we did have to stay 2 metres apart separated by 2 layers of chain link fencing at least we could chat wearing only scrubs). Many patients did recover fully – even some who had been really critically ill. The day that we were able to discharge a grandmother with 2 grandchildren all having recovered was a very special moment.

At last the numbers of cases seems to be falling – although the epidemic is sure to run for many more months there is a real feeling that things are heading in the right direction. Already many people are looking forwards to the next challenges. How to rebuild a health system which has been destroyed by the loss of so many healthcare workers, and by a loss of trust between the population and the hospitals? How to catch up on preventive healthcare such as childhood vaccination which has halted completely for the last year? How to catch up on lost education as school have been closed (and many have been used as makeshift Ebola care centres)? How rebuild a fractured society in which some people have been so scared that they have even abandoned sick relatives, and where many children have been left orphaned? Many people have died of Ebola, but many more have died because they could not get treatment for common diseases like malaria or pneumonia – with no clinics open no treatment has been available. Because of Ebola people have not had access to even basic healthcare. Women have died in childbirth because there is no way to safely perform a lifesaving caesarean section.

After a few weeks rest at home I will head back out to Sierra Leone for a couple more months to work on a project to strengthen the Community Care Centres and maybe support the reopening of primary health clinics.
My experience in Sierra Leone has taught me a lot. Obviously some practical skills around infection prevention and control, but more importantly it has forced me to learn greater adaptability. I had to work across cultural boundaries (we had team members from Denmark, Nigeria, Democratic Republic of Congo, Ireland, Kenya, Zimbabwe, New Zealand, USA, Spain as well as the UK and Sierra Leone….). I had to develop a new level of emotional resilience and in doing so made new friendships that I truly believe will be lifelong. Most importantly seeing Sierra Leone in this time of crisis reinforced my great respect for the spirit, determination and hospitality of Sierra Leoneans.